Alex Rakhmanchik, Absolute Protective Systems, Inc. Fire Sprinkler Fitter, was born in Moscow, Russia in 1950. With an interest in electronics manufacturing, he attended the Polytechnical Institute and earned his electrical engineering degree in 1972. Upon graduating from college, Alex served in the military for 2 years, and went on to gain employment with a sprinkler systems company, where he worked for the next 20 years. However, due to ethnic discrimination, which prevented upward mobility, Alex moved to Brooklyn, New York seeking opportunities that were unattainable in his home country.

In the United States, Alex attended school to learn English and was employed by Capital Fire Sprinkler Company. In May of 1998, he gained a position with Absolute Protective Systems, Inc. While working on his first installation job with Absolute Protective Systems, Inc., Alex discovered an old 1928 Grinnell sprinkler head on the floor. This discovery would be the starting point of a hobby that consisted of collecting antique fire sprinkler components. What started hobby ultimately became a passion, and Alex’s collection grew via locating products on job sites, as well as online purchasing and trading with other fire sprinkler component collectors. Alex, who also has an interest in history became an educator on the evolution of sprinkler heads, and notes that there are many technical similarities between sprinkler heads today and those of years past.

Alex created a truly impressive display of antique sprinkler heads, containing $3,000 worth of parts, and includes a model from 1896. This is currently featured at Absolute Protective Systems, Inc.’s corporate office. 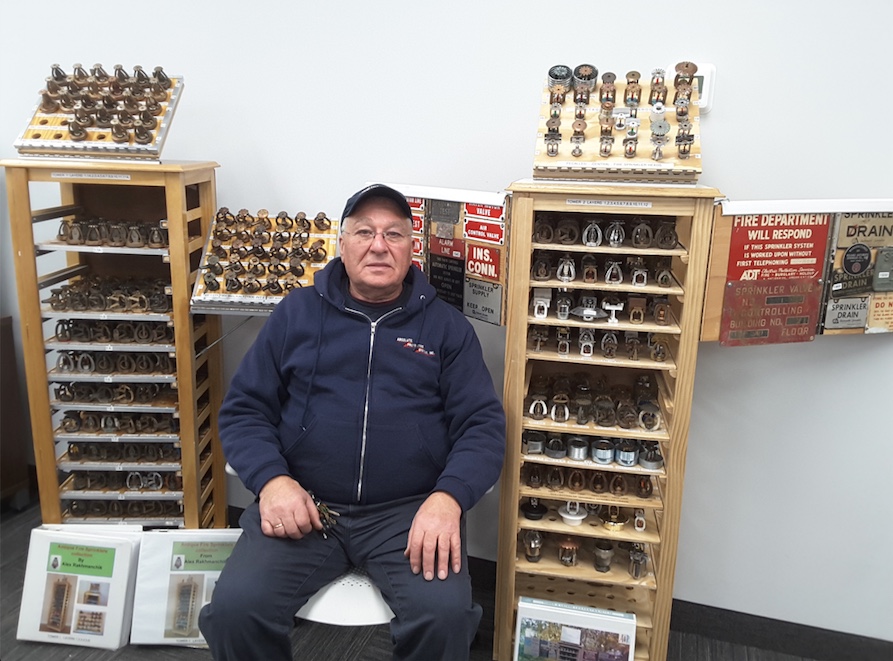